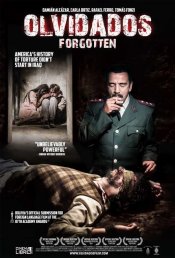 After suffering a heart attack, retired General José Mendieta (Damián Alcázar) is haunted by his dark past as an officer in Operation Condor, the CIA-backed campaign of political repression in Latin America that was responsible for executions, torture, and imprisonments in the 1970’s. It is estimated that over 400,000 people were imprisoned and 30,000 forcibly disappeared as a result of these government actions.

In a letter to his son Pablo (Bernardo Peña), Mendieta confesses the role he played in the abduction, persecution, and execution of countless men and women during his posting to Chile. Journalist Marco (Carlotto Cotta) and his pregnant wife Luciá (Carla Ortiz) are among those who were arrested, along with their activist friend Antonio (Tomás Fonzi) and revolutionary Andrea (Ana Calentano). They suffer terribly under Mendieta and his cohort Sanera (Rafael Ferro), which leads to a cascade of betrayals, secrets, and stolen lives that spans generations.

Poll: Will you see Olvidados?

Production: What we know about Olvidados

Olvidados Release Date: When was it released?

Olvidados was released in 2015 on Friday, September 18, 2015 (New York release). There were 9 other movies released on the same date, including Black Mass, Maze Runner: The Scorch Trials and Captive.

Looking for more information on Olvidados?