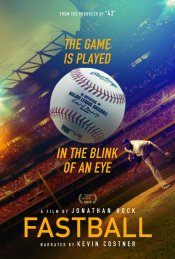 Hank Aaron and Derek Jeter, with Kevin Costner narrating, lead a cast of baseball legends & scientists who explore the magic within the 396 milliseconds it takes a fastball to reach home plate, and decipher who threw the fastest pitch ever.

Poll: Will you see Fastball?

Production: What we know about Fastball?

Fastball Release Date: When was the film released?

Fastball was released in 2016 on Friday, March 25, 2016 (Limited release). There were 8 other movies released on the same date, including Batman v Superman: Dawn of Justice, My Big Fat Greek Wedding 2 and Get a Job.

Looking for more information on Fastball?