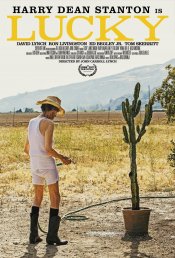 Lucky follows the spiritual journey of a 90-year-old atheist and the quirky characters that inhabit his off the map desert town. Having out lived and out smoked all of his contemporaries, the fiercely independent Lucky finds himself at the precipice of life, thrust into a journey of self exploration, leading towards that which is so often unattainable: enlightenment.

Poll: Will you see Lucky?

A look at the Lucky behind-the-scenes crew and production team.

Production: What we know about Lucky

Lucky Release Date: When was it released?

Lucky was released in 2017 on Friday, September 29, 2017 (Limited release). There were 16 other movies released on the same date, including American Made, Flatliners and 'Til Death Do Us Part.

Looking for more information on Lucky?