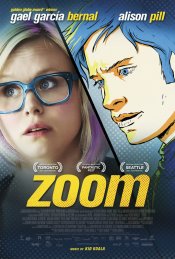 A fast-paced, pop-art inspired, multi-plot contemporary comedy. The film consists of three seemingly separate but ultimately interlinked storylines about a comic book artist, a novelist, and a film director. Each character lives in a separate world but authors a story about the life of another.

Poll: Will you see Zoom?

"Escape Room" , "Rise of the Planet of the Apes"

"The Exchange" , "Another Evil"

A look at the Zoom behind-the-scenes crew and production team.

Production: What we know about Zoom?

Zoom Release Date: When was the film released?

Zoom was released in 2016 on Friday, September 2, 2016 (Limited release). There were 10 other movies released on the same date, including The Light Between Oceans, Morgan and White Girl.

Looking for more information on Zoom?