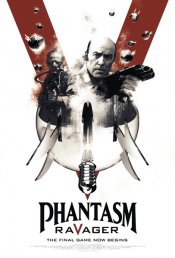 For 37 years, audiences have followed small town friends Reggie, Mike, and Jody in their quest to stop the evil, dimension-hopping schemes of The Tall Man (Angus Scrimm in his final performance) and his armada of killer Sentinel Spheres. Now, Don Coscarelli’s acclaimed horror/sci-fi Phantasm franchise comes to a close in a truly epic finale, a multi-dimensional battle across multiple timelines, alien planets, and altered realities, where no less than the fate of Earth is on the line.

Poll: Will you see Phantasm: Ravager?

A look at the Phantasm: Ravager behind-the-scenes crew and production team.

Production: What we know about Phantasm: Ravager?

Phantasm: Ravager Release Date: When was the film released?

Phantasm: Ravager was released in 2016 on Friday, October 7, 2016 (Limited release). There were 16 other movies released on the same date, including The Girl on the Train, Middle School: The Worst Years of My Life and The Birth of a Nation.