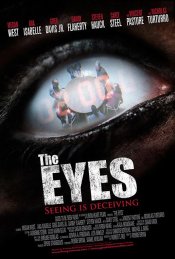 Some say we are only as sick as our secrets but what if our government really knew those secrets? What if they’ve watched every move we’ve made and our secrets aren’t really hidden? In The Eyes, six strangers with unspeakable pasts wake up imprisoned in an abandoned warehouse and discover they are being forced to participate in an evil governmental experiment. Five must die. One can live. And THEY have two hours to decide amongst themselves who survives. The clock is ticking and if they don’t decide… they ALL die. The Eyes shows us that someone is always watching.

Poll: Will you see The Eyes?

Crew: Who's making The Eyes

A look at the The Eyes behind-the-scenes crew and production team.

Production: What we know about The Eyes

The Eyes Release Date: When was it released?

The Eyes was released in 2017 on Friday, April 7, 2017 (Limited release). There were 18 other movies released on the same date, including Going in Style, Smurfs: The Lost Village and The Case for Christ.

Questions: Asked About The Eyes

Looking for more information on The Eyes?