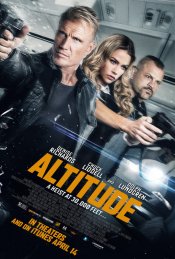 Gretchen Blair (Denise Richards) is a headstrong FBI agent who goes rogue on a hostage negotiation and is sent packing to a desk job back in DC. By a stroke of luck, she’s upgraded to business class on her flight—but as soon as the plane takes off, her seatmate (Kirk Barker) offers her millions of dollars if she can get him off the plane alive. As his ex-partners (Dolph Lundgren, Chuck Liddell, and Greer Grammar) stage a brutal hijacking, Gretchen finds herself in the fight of her life—choosing sides between two factions of a criminal gang and trying to keep the plane from going down.

Poll: Will you see Altitude?

Production: What we know about Altitude

Altitude Release Date: When was it released?

Altitude was released in 2017 on Friday, April 14, 2017 (Limited release). There were 11 other movies released on the same date, including The Fate of the Furious, Spark: A Space Tail and The Lost City of Z.

Looking for more information on Altitude?