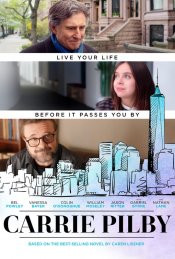 Carrie Pilby, a 19-year-old Harvard grad, lives in a world of “oversexed hypocrites.” When her therapist assigns goals, Carrie resists the mundane yet somehow manages to evolve into the compassionate person she never knew she wanted to be.

Poll: Will you see Carrie Pilby?

A look at the Carrie Pilby behind-the-scenes crew and production team. The film's director Susan Johnson last directed To All The Boys I've Loved Before and Rabbit Cake.

Production: What we know about Carrie Pilby

Carrie Pilby Release Date: When was it released?

Carrie Pilby was released in 2017 on Friday, March 31, 2017 (Limited release). There were 11 other movies released on the same date, including The Zookeeper's Wife, The Boss Baby and Ghost in the Shell.