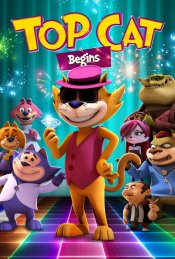 Witness the beginning of the world’s most audacious cat, Top Cat! Poor, lonely and living on the streets, Top Cat is one sad cat, until a chance meeting with Benny, a naïve and good-hearted feline looking for adventure. The pair quickly become best buddies - and partners in crime - pickpocketing their way out of poverty. Setting their sights higher, they decide to steal from Mr. Big, who rules New York’s backstreets. As Top Cat and Benny hatch a plan, little do they know, success is just the start of their problems.

Production: What we know about Top Cat Begins?

Top Cat Begins Release Date: When was the film released?

Top Cat Begins was released in 2017 on Friday, September 29, 2017 (Limited release). There were 16 other movies released on the same date, including American Made, Flatliners and Different Flowers.