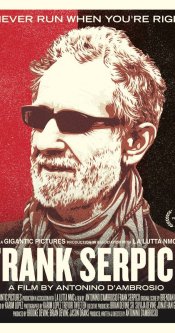 In the early 1970s, one man stood up to the entire New York City police force. Hailed as a hero by many, hated by others, officer Frank Serpico made headlines when he blew the whistle on a culture of bribery and corruption within the department. This is his story.

Poll: Will you see Frank Serpico?

A look at the Frank Serpico behind-the-scenes crew and production team.

Production: What we know about Frank Serpico

Frank Serpico Release Date: When was it released?

Frank Serpico was released in 2017 on Wednesday, November 1, 2017 (Limited release). There were 2 other movies released on the same date, including A Bad Moms Christmas and The Light of the Moon.