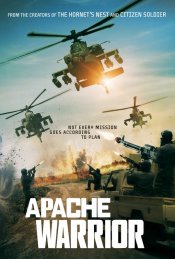 A feature-length documentary that puts the viewer inside the cockpit of an elite U.S. Army Aviation Helicopter Squadron as they launch a Deep Attack during the initial surge into Iraq in March, 2003.

Poll: Will you see Apache Warrior?

Production: What we know about Apache Warrior

Apache Warrior Release Date: When was it released?

Apache Warrior was released in 2017 on Friday, November 3, 2017 (Limited release). There were 12 other movies released on the same date, including Thor: Ragnarok, The Killing of a Sacred Deer and Roman J. Israel, Esq.