An insiders' account of President Barack Obama's foreign policy team during their last year in office. Featuring unprecedented access inside the White House and State Department, The Final Year offers an uncompromising view of the inner workings of the Obama Administration as they prepare to leave power after eight years.

Poll: Will you see The FInal Year?

Crew and Production Credits: Who's making The FInal Year?

A look at the The FInal Year behind-the-scenes crew and production team. The film's director Greg Barker last directed Sergio. 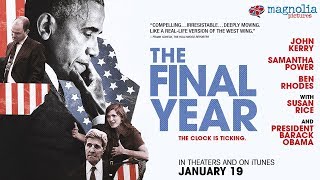 Production Timeline: When did the The FInal Year come together?

The FInal Year Release Date: When was it released?

The FInal Year was released in 2018 on Friday, January 19, 2018 (Limited release). There were 11 other movies released on the same date, including Den of Thieves, 12 Strong and Forever My Girl.

Questions: Asked About The FInal Year

Looking for more information on The FInal Year?