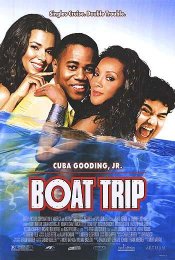 The story follows Jerry (Cuba Gooding, Jr.), a jilted guy left by his fiancee (Vivica A. Fox), deciding a vacation is in order after his best friend Nick (Horatio Sanz) sells him on the idea of a singles cruise packed with available gorgeous women. However, once out to sea, Jerry and Nick quickly realize they've mistakenly ended up on a cruise of a different kind.

Poll: Will you see Boat Trip?

Production: What we know about Boat Trip?

Boat Trip Release Date: When was the film released?

Boat Trip was released in 2003 on Friday, March 21, 2003 (). There were 4 other movies released on the same date, including Gaudi Afternoon, Piglet's Big Movie and Dreamcatcher.