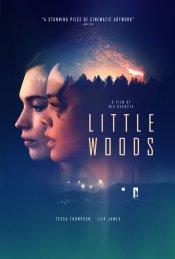 A modern Western that tells the story of two sisters, Ollie (Thompson) and Deb (James), who are driven to work outside the law to better their lives. For years, Ollie has illicitly helped the struggling residents of her North Dakota oil boomtown access Canadian health care and medication. When the authorities catch on, she plans to abandon her crusade, only to be dragged in even deeper after a desperate plea for help from her sister.

Poll: Will you see Little Woods?

Production: What we know about Little Woods

Little Woods Release Date: When was it released?

Little Woods was released in 2019 on Friday, April 19, 2019 (Limited release). There were 15 other movies released on the same date, including The Curse of La Llorona, Under the Silver Lake and Drunk Parents.