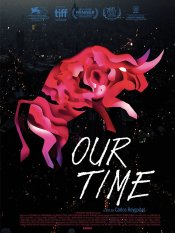 A family lives in the Mexican countryside raising fighting bulls. Esther is in charge of running the ranch, while her husband Juan, a world-renowned poet, raises and selects the beasts. Although in an open marriage, their relationship begins to crumble when Esther falls in love with an American horsebreaker and Juan is unable to control his jealousy.

Poll: Will you see Our Time?

Crew: Who's making Our Time

Production: What we know about Our Time

Our Time Release Date: When was it released?

Our Time was released in 2019 on Friday, June 14, 2019 (New York release). There were 19 other movies released on the same date, including Shaft, Men in Black: International and The Dead Don't Die.

Questions: Asked About Our Time

Looking for more information on Our Time?