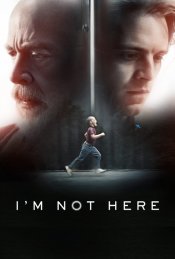 Steve is haunted by his past as every object in his home, every sound he hears reminds him of a specific event in his life. Steve connects the events of his life to discover how he ended up alone and broken. As he relives each significant memory, he understands the generational issues that have held him captive like his father before him.

Poll: Will you see I'm Not Here?

Crew: Who's making I'm Not Here

A look at the I'm Not Here behind-the-scenes crew and production team. The film's director Michelle Schumacher last directed 3 Geezers!.

Production: What we know about I'm Not Here

I'm Not Here Release Date: When was it released?

I'm Not Here was released in 2019 on Friday, March 8, 2019 (Limited release). There were 6 other movies released on the same date, including Captain Marvel, Gloria Bell and The Wedding Guest.

Questions: Asked About I'm Not Here

Looking for more information on I'm Not Here?