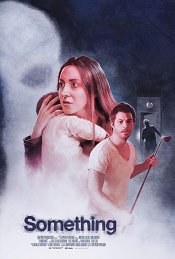 Sleep deprivation and the possibly of post-natal depression takes center stage as a young couple struggles to adjust to life with their new baby. As the mother starts to break down, she begins to feel that there is someone in their house, watching them. The father dismisses her claims to being overly tired, until one evening, he too catches a glimpse of the intruder. Unsure of whether they are being hounded by a stranger or being driven insane, the two of them fear for their safety and that of their new baby.

Poll: Will you see Something?

Crew: Who's making Something

A look at the Something behind-the-scenes crew and production team.

Production: What we know about Something

Something Release Date: When was it released?

Something was released in 2019 on Friday, March 1, 2019 (Los Angeles release). There were 17 other movies released on the same date, including Tyler Perry's A Madea Family Funeral, This Magnificent Cake! and Mapplethorpe.

Questions: Asked About Something

Looking for more information on Something?