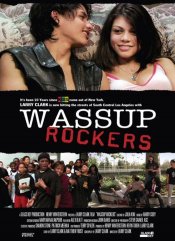 A group of South Central Los Angeles Hispanic teenagers do not conform to the hip-hop culture of their neighborhood, but instead ride skateboards and listen to punk rock. These kids take busses to Beverly Hills to skate and meet rich girls which leads to trouble with parents, police and boyfriends.

Poll: Will you see Wassup Rockers?

Production: What we know about Wassup Rockers?

Wassup Rockers Release Date: When was the film released?