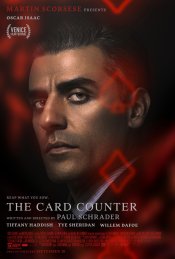 William Tell, a gambler and former serviceman, just wants to play cards but his spartan existence on the casino trail is shattered when he is approached by Cirk, a vulnerable and angry young man seeking help to execute his plan for revenge on a military colonel. Tell sees a chance at redemption through his relationship with Cirk. Gaining backing from mysterious gambling financier La Linda, Tell takes Cirk with him on the road, going from casino to casino until the unlikely trio set their sights on winning the World Series of poker in Las Vegas. But keeping Cirk on the straight-and-narrow proves impossible, dragging Tell back into the darkness of his past.

Poll: Will you see The Card Counter?

Production: What we know about The Card Counter?

Production is scheduled to begin in early 2020.

The Card Counter Release Date: When was the film released?

The Card Counter was released in 2021 on Friday, September 10, 2021 (Limited release). There were 20 other movies released on the same date, including Queenpins, Malignant and Catch the Bullet .

Q&A Asked about The Card Counter

Looking for more information on The Card Counter?