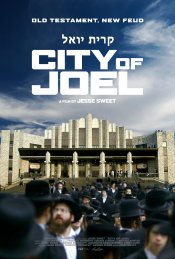 50 miles north of New York City, the town of Monroe is a micro-cosm for a hyper-partisan and divided nation as a land-dispute between an ultra-orthodox Hassidic sect and their secular neighbors erupts into a turf war.

City of Joel follows an ultra-orthodox Hasidic sect as they wage a turf war with their secular neighbors. 50 miles north of New York City, the Satmar sect has thrived in a 1.1 square mile religious haven called Kiryas Joel, or City of Joel, for over 40 years. With some of the highest rates of marriage, birth, and religious observance in the US, their success has come at a price, as Kiryas Joel is no longer big enough to hold its 22,000 members. When a plan is created to double the size of the village to keep up with its growth, their secular neighbors fight back, believing that the expansion will disrupt their lives, harm the environment, and tilt the balance of local political power. With unprecedented access, the documentary presents people on all sides of a conflict - from religious zealots to dissidents, from rabbis to people who doubt their own faith as they struggle to find their place in the City of Joel.

Poll: Will you see City of Joel?

Crew and Production Credits: Who's making City of Joel?

A look at the City of Joel behind-the-scenes crew and production team. The film's writer Jesse Sweet last wrote The Last Bachelor.

Production Timeline: When did the City of Joel come together?

City of Joel Release Date: When was it released?

City of Joel was released in 2020 on Friday, January 3, 2020 in limited movie theaters. There were 2 other movies released on the same date, including The Grudge and Inmate Zero.

Looking for more information on City of Joel