July 7, 2021 • Filming completed; editing of shot film; music composition and recordings, as well as sound and visual effects being added.

American Underdog tells the inspirational true story of Kurt Warner (Zachary Levi), who went from a stockboy at a grocery store to a two-time NFL MVP, Super Bowl champion, and Hall of Fame quarterback. The film centers on Warner’s unique story and years of challenges and setbacks that could have derailed his aspirations to become an NFL player – but just when his dreams seemed all but out of reach, it is only with the support of his wife, Brenda (Anna Paquin) and the encouragement of his family, coaches, and teammates that Warner perseveres and finds the strength to show the world the champion that he already is. American Underdog is an uplifting story that demonstrates that anything is possible when you have faith, family and determination.

Poll: Will you see American Underdog?

"The Devil's Light" , "Better Watch Out"

"Black Wings Has My Angel" , "The Parting Glass" 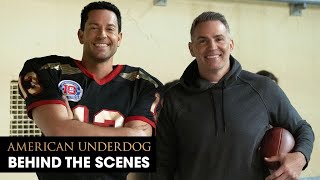 Production: What we know about American Underdog?

American Underdog Release Date: When is the film coming out?

American Underdog is coming out in 2021 on Friday, December 10, 2021 (Nationwide release). There are 3 other movies coming out on the same date, including West Side Story, Violence of Action and Journal for Jordan.