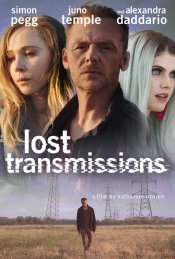 Hannah, a shy songwriter, discovers that her friend, respected record producer Theo Ross, has lapsed on his medication for schizophrenia. Hannah rallies a group of friends to help commit Theo to a psychiatric facility, chasing him as he outruns his colorful delusions through the glamour and grit of Los Angeles. From the highs of rock 'n' roll to rock bottom, it's a story of the unsung heroes behind the hits and the inadequacies of our mental health system.

Poll: Will you see Lost Transmissions?

A look at the Lost Transmissions behind-the-scenes crew and production team.

Production: What we know about Lost Transmissions?

Lost Transmissions Release Date: When was the film released?

Lost Transmissions was released in 2020 on Friday, March 13, 2020 (Limited release). There were 13 other movies released on the same date, including The Hunt, Bloodshot and I Still Believe.