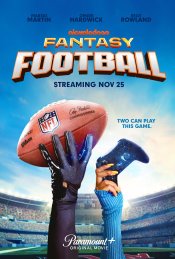 In this father-daughter sports fantasy, everything changes when Callie A. Coleman (Marsai Martin) discovers she can magically control her father, Bobby’s (Omari Hardwick) performance on the football field. When Callie plays as her dad, a running back for the Atlanta Falcons, in EA SPORTS™’ “Madden NFL 23,” Bobby is transformed from a fumblitis-plagued journeyman to a star running back bound for superstardom alongside his daughter and wife Keisha (Kelly Rowland). With the NFL Playoffs looming and the pressures of Callie’s new commitment to her friends on the robotics team mounting, the two must forge ahead to keep the magic a secret as they juggle the highs and lows of their newfound success, all as they rediscover what it really means to be a family.

Poll: Will you see Fantasy Football?

The Curse of Bridge Hollow

A look at the Fantasy Football behind-the-scenes crew and production team.

Production: What we know about Fantasy Football?

Fantasy Football Release Date: When was the film released?


Fantasy Football was a Paramount+ release in 2022 on Friday, November 25, 2022. There were 8 other movies released on the same date, including White Noise, The Son and The Guardians of the Galaxy Holiday Special.

Fantasy Football DVD & Blu-ray Release Date: When will the film be released?


Fantasy Football DVD & Blu-ray is expected to be released January 2023. Subject to change and may not to all markets.