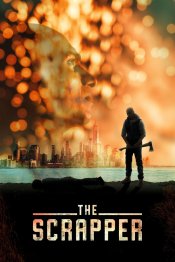 Queens, New York City. A criminal playing-ﬁeld of modern immigrant syndicates: human-trafﬁcking, money-laundering and unﬂinching brutality. Uncomfortable in his Punjabi-Mexican skin, ex-con turned 'scrapper' Jake carries the weight of both his family legacy and a violent past. Caring for a mentally-challenged brother and an unborn child on the way, he is focused on turning his life around. When one last job presents a way out for good, he must decide between loyalty to blood ties or to his newfound family. His past soon catches up with him and he’s thrown into the middle of a conﬂict between Punjabi and Mexican factions led by violent, ruthless criminals. As events explode into brutal violence, with everyone he loves at stake, he may need to go to his own darkest places to ﬁnally escape.

Poll: Will you see The Scrapper?

"The Kindergarten Teacher" , "Growing Up Smith"

A look at the The Scrapper behind-the-scenes crew and production team.

Production: What we know about The Scrapper?

The Scrapper Release Date: When is the film coming out?

Q&A Asked about The Scrapper

Looking for more information on The Scrapper?