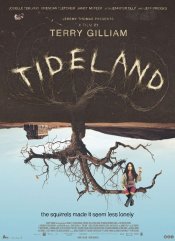 After her mother dies from a heroin overdose, Jeliza-Rose is taken from the big city to a rural farmhouse by her father. As she tries to settle into a new life in her mother's childhood home, Jeliza-Rose's attempts to deal with what's happened result in increasingly odd behavior, as she begins to communicate mainly with her bodiless Barbie doll heads and Dell, a neighborhood woman who always wears a beekeeper's veil.

Poll: Will you see Tideland?

The Menu, Me Before You

7 Days to Vegas, The Secret Lives of Dorks

A look at the Tideland behind-the-scenes crew and production team. The film's director Terry Gilliam last directed The Man Who Killed Don Quixote and The Zero Theorem.

Production: What we know about Tideland?

Tideland Release Date: When was the film released?

Tideland DVD & Blu-ray Release Date: When was the film released?

Looking for more information on Tideland?