In the Mix Movie 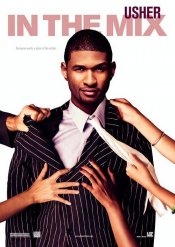 When New York's hottest nightclub deejay Darrell (Usher) saves a mob boss's life (Chazz Palminteri), he is rewarded for his bravery with the responsibilty of watching over the don's beautiful daughter Dolly (Emmanuelle Chriqui). The sparks soon begin to fly between this attractive couple from very different worlds, against her formidable father's wishes. Meanwhile, the don has other things on his mind—quashing a potential war with an arch-rival and controlling a young, ruthless challenger to his throne. In the end, all's fair in love and gangster warfare in this hip, romantic comedy, "In the Mix".

Poll: Will you see In the Mix?

Crew: Who's making In the Mix

In the Mix Trailers & Videos

Production: What we know about In the Mix

In the Mix Release Date: When was it released?

In the Mix was released in 2005 on Wednesday, November 23, 2005 (). There were 6 other movies released on the same date, including The Libertine, Syriana and Just Friends.

Questions: Asked About In the Mix

Looking for more information on In the Mix?