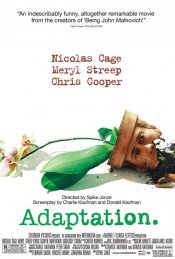 It's two odd stories in one. The plot follows the attempt of screenwriter Charlie Kaufman (Nicolas Cage) to adapt Susan Orlean's nonfiction novel "The Orchid Thief" for the big screen. As Kaufman tries to work with the book's true story — the tale of John Laroche (Chris Cooper), a Florida plant dealer who works with Seminole Indians to create clones of rare orchids, which he sells to collectors for huge profits — he nearly goes mad. Enter his fictional twin (also Cage), a more successful version of Charlie. Charlie finally manages to finish the script, finding that in the process, he's incorporated himself and his writer's block into the story.

Poll: Will you see Adaptation.?

A look at the Adaptation. behind-the-scenes crew and production team. The film's director Spike Jonze last directed Beastie Boys Story and Her.

Production: What we know about Adaptation.

Adaptation. Release Date: When was it released?

Adaptation. was released in 2002 on Friday, December 6, 2002 (). There were 4 other movies released on the same date, including Analyze That, To End All Wars and Equilibrium.

Looking for more information on Adaptation.?