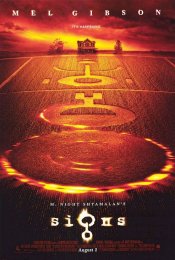 A thriller set in Bucks County, Pennsylvania focusing on the mysterious appearance of a five-hundred-foot design of circles and lines carved into a family's crops. Mel Gibson stars as Graham Hess, the family patriarch, who is tested in his journey to find the truth behind the unfolding mystery. Joaquin Phoenix is Merrill Hess, brother to Graham and a former minor league baseball star.

Poll: Will you see Signs?

Production: What we know about Signs

Signs Release Date: When was it released?

Signs was released in 2002 on Friday, August 2, 2002 (). There were 1 other movie released on the same date, including My Big Fat Greek Wedding.

Looking for more information on Signs?