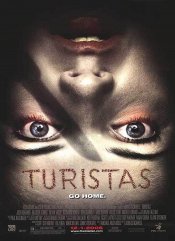 Six college students, while backpacking across Brazil, get stranded in the jungles and imprisoned by a military group.

Poll: Will you see Turistas?

Production: What we know about Turistas

Turistas Release Date: When was it released?

Turistas was released in 2006 on Friday, December 1, 2006 (). There were 2 other movies released on the same date, including The Nativity Story and Van Wilder: The Rise of Taj.

Looking for more information on Turistas?