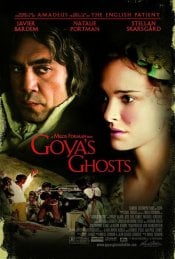 Academy Award nominees Natalie Portman and Javier Bardem star in two-time Academy Award winning director Milos Forman's thrilling new romantic drama! Goya's Ghosts is a sweeping historical epic, told through the eyes of celebrated Spanish painter Francisco Goya (Skarsgard). Set against the backdrop of political turmoil at the end of the Spanish Inquisition and start of the invasion of Spain by Napoleon's army, the film captures the essence and beauty of Goya's work which is best known for both the colorful depictions of the royal court and its people, and his grim depictions of the brutality of war and life in 18th century Spain. When Goya's beautiful muse (Portman) is accused of being a heretic, renowned painter Francisco Goya (Skarsgard) must convince his old friend Lorenzo (Bardem), a power-hungry monk and leader of the Spanish Inquisition, to spare her life.

Poll: Will you see Goya's Ghosts?

Production: What we know about Goya's Ghosts

Goya's Ghosts Release Date: When was it released?