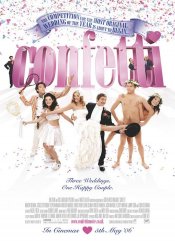 A sharp and affectionate comedy featuring an ensemble of UK comedic talents, "Confetti " follows three couples as they duke it out to win a bridal magazine contest for "Most Original Wedding of the Year." The talented cast -- which includes Martin Freemam, Jessica Stevenson, Stephen Mangan, Felicity Montagu, award-winning comedian Jimmy Carr in his first screen performance and Alison Steadman -- was afforded total creative freedom within the confines of a carefully crafted story frame. To prepare, the cast took part in weeks of intense workshops where they began the process of developing and inhabiting their unique roles.

Poll: Will you see Confetti?

"Swinging with the Finkels" , "The Hobbit: An Unexpected Journey"

"Son of Rambow" , "Bridget Jones: The Edge of Reason"

A look at the Confetti behind-the-scenes crew and production team.

Production: What we know about Confetti?

Confetti Release Date: When was the film released?

Confetti was released in 2006 on Friday, May 26, 2006 (). There were 5 other movies released on the same date, including Little Man, An Inconvenient Truth and Cavite.

Looking for more information on Confetti?