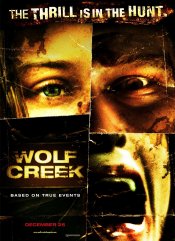 A chilling, factually-based, story of three road-trippers in remote Australia who are plunged into danger when they accept help from a friendly local.

Poll: Will you see Wolf Creek?

Production: What we know about Wolf Creek

Wolf Creek Release Date: When was it released?

Wolf Creek was released in 2006 on Friday, January 6, 2006 (). There were 5 other movies released on the same date, including Hostel, Grandma's Boy and Fateless .