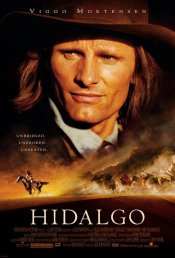 Poll: Will you see Hidalgo?

Thirteen Lives, Crimes of the Future

She Will, Silent Hill: Revelations 3D

A look at the Hidalgo behind-the-scenes crew and production team. The film's director Joe Johnston last directed The Nutcracker and the Four Realms and Captain America: The First Avenger. The film's writer John Fusco last wrote The Highwaymen and The Shack.

Production: What we know about Hidalgo?

Hidalgo Release Date: When was the film released?

Hidalgo was released in 2004 on Friday, March 5, 2004 (). There were 2 other movies released on the same date, including The Reckoning and Starsky & Hutch.

Looking for more information on Hidalgo?