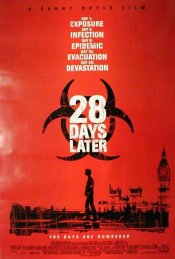 A virus that locks those infected into a permanent state of killing rage, is accidentally released from a British research facility. Carried by animals and humans, the virus is impossible to contain, and spreads across the entire planet. Twenty-eight days later, a small group of survivors are trapped in London, caught in a desperate struggle to protect themselves from the infected. As they attempt to salvage a future from the apocalypse, they find that their most deadly enemy is not the virus, but other survivors.

Production: What we know about 28 Days Later

28 Days Later Release Date: When was it released?

28 Days Later was released in 2003 on Friday, June 27, 2003 (). There were 4 other movies released on the same date, including The Hard Word, Deathwatch and Charlie's Angels: Full Throttle.