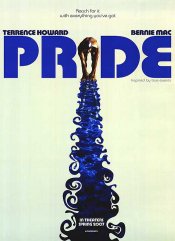 The year is 1973, and Jim Ellis, a college-educated African-American, can't find a job. Driven by his love of competitive swimming, Jim converts an abandoned recreational pool hall in a Philadelphia slum with the help of Elston, a local janitor. But when city officials mark the new Philadelphia Department of Recreation for demolition, Jim fights back--by starting the city's first African-American swim team. Recruiting troubled teens from the streets, Jim struggles to transform a motley team of novices into capable swimmers--all in time for the upcoming state championships. But as racism, violence and an unsympathetic city official threaten to tear the team apart, Jim must do everything he can to convince his swimmers that victory, both in and out of the pool, is within their reach.

Poll: Will you see Pride?

A Snowy Day in Oakland, The Loneliest Boy in the World

A look at the Pride behind-the-scenes crew and production team. The film's director Sunu Gonera last directed Hello, I Love You.

Production: What we know about Pride?

Pride Release Date: When was the film released?

Pride DVD & Blu-ray Release Date: When was the film released?

Looking for more information on Pride?