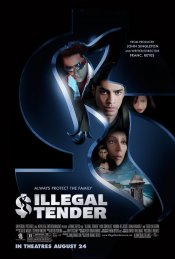 The film tells the story of Latino college student Wilson Jr. (Rick Gonzalez) and his courageous mother Millie De Leon (Wanda de Jesus) fleeing from the thugs that killed his father (Manny Perez). After years of uncertainty about the true meaning behind their life on the run, Wilson Jr. and his love, Ana, (Dania Ramirez) find themselves in life-threatening danger. Wilson Jr. must return to Puerto Rico to unveil the dark secrets from his family's past.

After the gangsters who killed his father come to settle a score, a teenage boy and his mother turn the tables on the killers. Producer John Singleton ("Four Brothers", "Hustle & Flow") and writer/director Franc. Reyes ("Empire") join forces to tell the story of one Latino family's quest for honor and revenge as the hunted become the hunters in the new thriller "Illegal Tender".

Wilson De Leon, Jr. (Rick Gonzalez) is an exceptional college student with an adoring girlfriend, doting mother and a future full of promise. He has never wanted for anything, and he has never been forced to stand his ground. But when ghosts from his mother's past come back to haunt his present, he must defend his family...and quickly turn into the strong man his father prayed he'd become.

Nothing could stop Wilson's mother, Millie (Wanda De Jesus), from protecting her two boys. Forced to flee her home after gangsters killed her husband, she made an oath to give her children only the best. But all that changes when an enemy from the past catches up with them. It's finally time to take action--and now, they're done running.

Weapons at the ready, Wilson, Jr. and Millie prepare for a final showdown with the murderer who robbed him of a father and her of a husband. Now, in a battle fueled by family ties and blood feuds, it will become very clear what happens when anyone tries to come between this son and his mother.

Poll: Will you see Illegal Tender?

War of the Worlds, Apartment 143

Night of the Sicario, Locked In

Production: What we know about Illegal Tender?

Illegal Tender Release Date: When was the film released?


Illegal Tender was a release in 2007 on Friday, August 24, 2007. There were 5 other movies released on the same date, including War, The Nanny Diaries and The Hottest State.