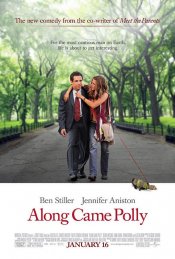 Ben Stiller portrays risk-averse Reuben Feffer, whose best-laid plans for life and love careen wildly off track when his bride (Debra Messing) dumps him on their honeymoon for a muscle-bound scuba instructor (Hank Azaria). Stunned, humiliated and in the grip of acute indigestion, Reuben plans to play it safer than ever. But a chance encounter with an adventure-craving, childhood friend named Polly (Jennifer Aniston) shoots him into a whirlwind of extreme sports, spicy foods, ferrets, salsa dancing and living in the moment.

Poll: Will you see Along Came Polly?

Night at the Museum: Secret of the Tomb, Locked Down

Horrible Bosses, Just Go With It

The Ides of March, Pirate Radio

A look at the Along Came Polly behind-the-scenes crew and production team. The film's director John Hamburg last directed Me Time and Why Him?.

Production: What we know about Along Came Polly?

Along Came Polly Release Date: When was the film released?

Along Came Polly was released in 2004 on Friday, January 16, 2004 (). There were 3 other movies released on the same date, including Disney's Teacher's Pet, Torque and Big Fish.

Q&A Asked about Along Came Polly

Looking for more information on Along Came Polly?