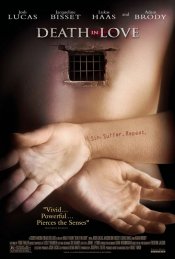 The indie drama follows a pair of story lines that revolve around two brothers (Lucas and Haas). While Haas' character must deal with his mother (Bisset), his brother is lost in life until he is befriended by a scam artist (Brody).

Poll: Will you see Death in Love?

Death in Love Cast: Who are the actors?

Crew and Production Credits: Who's making Death in Love?

A look at the Death in Love behind-the-scenes crew and production team. The film's writer Boaz Yakin last wrote Max and Now You See Me.

Production Timeline: When did the Death in Love come together?

Death in Love Release Date: When was it released?

Death in Love was released in 2009 on Friday, July 17, 2009 There were 3 other movies released on the same date, including Homecoming, The Age of Stupid and 500 Days of Summer.

Looking for more information on Death in Love