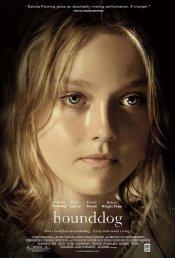 Taking place in the 1960s American South, Dakota Fanning plays Lewellen. a troubled 12-year old girl who finds solace from an abusive life through blues music. Blues music is delicately woven throughout this touching film to create a colorful tapestry of a melancholy life that finds release and healing through the music of Elvis Presley, whose character appears in the movie, albeit briefly, and the singing of the Blues.

Poll: Will you see Hounddog?

Production: What we know about Hounddog

Hounddog Release Date: When was it released?

Hounddog was released in 2008 on Friday, September 19, 2008 (). There were 5 other movies released on the same date, including Ghost Town, Lakeview Terrace and Igor.

Looking for more information on Hounddog?