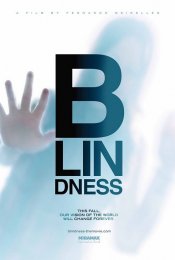 When a sudden plague of blindness devastates a city, a small group of the afflicted band together to triumphantly overcome the horrific conditions of their imposed quarantine. "Blindness", starring Julianne Moore, Gael Garcia Bernal, Mark Ruffalo, Sandra Oh and Danny Glover, is a harrowing tale about the fragility of mankind.

Poll: Will you see Blindness?

"The Suicide Squad" , "The New Mutants"

A look at the Blindness behind-the-scenes crew and production team.

Production: What we know about Blindness?

Blindness Release Date: When was the film released?

Blindness was released in 2008 on Friday, October 3, 2008 (). There were 9 other movies released on the same date, including How to Lose Friends and Alienate People, Nick and Norah's Infinite Playlist and Beverly Hills Chihuahua.

Looking for more information on Blindness?