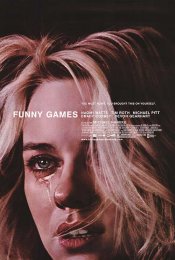 Naomi Watts and Tim Roth are a middle-class couple on vacation who endure a terrifying ordeal at the hands of two psychopaths.

In this provocative and brutal thriller from director Michael Haneke, a vacationing family gets an unexpected visit from two deeply disturbed young men. Their idyllic holiday turns nightmarish as they are subjected to unimaginable terrors and struggle to stay alive.

Poll: Will you see Funny Games?

Funny Games Cast: Who are the actors?

Film Details & Notes: What do we know about Funny Games?

Production Timeline: When did the Funny Games come together?

Funny Games Release Date: When was it released?

Funny Games was released in 2008 on Friday, March 14, 2008 There were 4 other movies released on the same date, including Dr. Seuss' Horton Hears a Who, Never Back Down and Sleepwalking.