How She Move Movie 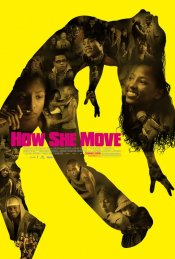 Raya Green is seventeen-years-old, incredibly bright and full of promise. She attends a prestigious private school outside her tough, crime-ridden neighborhood. When a family tragedy leaves her family unable to pay her tuition, Raya is forced to return to the old community she so desperately wants to escape. She soon finds herself drawn into the world of underground dance competitions and smells an opportunity to win some money, get out of the neighborhood, help her family and return to her old school. But as the dance tournament unfolds, Raya realizes that real success only comes to those brave enough to tackle it on their own terms.

Poll: Will you see How She Move?

Crew: Who's making How She Move

A look at the How She Move behind-the-scenes crew and production team. The film's director Ian Iqbal Rashid last directed Touch of Pink and American English.

How She Move Trailers & Videos

Production: What we know about How She Move

How She Move Release Date: When was it released?

Questions: Asked About How She Move

Looking for more information on How She Move?