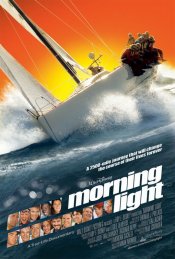 Fifteen young sailors...six months of intense training... one chance at the brass ring. This exciting true-life documentary tells the inspiring story of a group of intrepid and determined young men and women, on the cusp of adulthood, as they embark on life's first great adventure. Racing a high-performance 52-foot sloop in the Transpac, the most revered of open-ocean sailing competitions, the crew of "Morning Light" matches wits and skills in a dramatic 2,300-mile showdown against top professionals. From their earliest training sessions in Hawaii conducted by world-class teachers through their test of endurance on the high seas, they form an unbreakable bond in the process of becoming singular team that is greater than the sum of its parts.

Poll: Will you see Morning Light?

A look at the Morning Light behind-the-scenes crew and production team.

Production: What we know about Morning Light

Morning Light Release Date: When was it released?

Morning Light was released in 2008 on Friday, October 17, 2008 (). There were 8 other movies released on the same date, including Sex Drive, Flashbacks of a Fool and Max Payne.