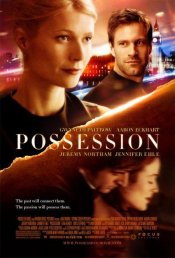 Maud Bailey (Gwyneth Paltrow), a brilliant English academic given to doing things by the book, is researching the life and work of poet Christabel LeMotte (Jennifer Ehle). Roland Mitchell (Aaron Eckhart) is an upstart American scholar in London on a fellowship to study the great Randolph Henry Ash (Jeremy Northam), now best known for a collection of rapturous, late-life poems dedicated to his wife. When Maud and Roland discover a cache of love letters that appear to be from Ash to LaMotte, they follow a trail of clues across England to the Continent, echoing the journey of the impassioned couple a century earlier.

Poll: Will you see Possession?

A Late Quartet, The Singing Detective

Kingsglaive: Final Fantasy XV, The Adventurer: The Curse of the Midas Box

A look at the Possession behind-the-scenes crew and production team. The film's director Neil LaBute last directed The Burnt Orange Heresy and Some Velvet Morning.

Production: What we know about Possession?

Possession Release Date: When was the film released?

Looking for more information on Possession?