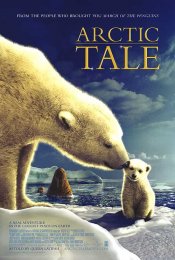 Join narrator Queen Latifah as she follows two very different arctic creatures, Nanu, the polar bear cub and Seela, the walrus pup, through exciting and harrowing struggles for survival. Armed only with their natural instincts and mothers' guidance, these inspiring animals face countless trials and challenges in a beautiful icebound world that is rapidly melting beneath them.

An epic adventure that explores the vast world of the Great North which follows a walrus, Seela and a polar bear, Nanu, on their journey from birth to adolescence to maturity and parenthood in the frozen Arctic wilderness. Once basking in a perpetual winter wonderland of snow and ice, the walrus and the polar bear are losing their beautiful icebound world as it melts from underneath them.

Poll: Will you see Arctic Tale?

A look at the Arctic Tale behind-the-scenes crew and production team.

Production: What we know about Arctic Tale

Arctic Tale Release Date: When was it released?