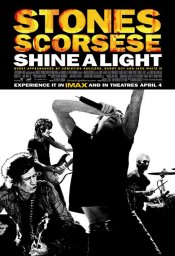 This Rolling Stones documentary focuses on the two concerts from the group's current "A Bigger Bang" tour and includes scenes from a recent concert in Austin, Texas. It also includes behind-the-scenes footage and interviews.

Poll: Will you see Shine a Light?

Crew: Who's making Shine a Light

A look at the Shine a Light behind-the-scenes crew and production team. The film's director Martin Scorsese last directed Rolling Thunder and Silence.

Production: What we know about Shine a Light

Shine a Light Release Date: When was it released?

Shine a Light was released in 2008 on Friday, April 4, 2008 (). There were 4 other movies released on the same date, including Leatherheads, Nim's Island and The Ruins.

Questions: Asked About Shine a Light

Looking for more information on Shine a Light?