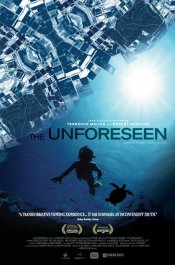 A west Texas developer, who over two decades has tried to build a major housing development around a creek in pristine hill country, takes a hard look at the American dream.

In the 1980s, an ambitious real estate developer came to Austin, Texas with a dream--to transform miles of pristine wilderness into a sprawling self-sufficient city. When the development threatened a local treasure, a fragile limestone aquifer and a naturally spring-fed swimming hole, the community decided to fight back. The chronicle is a microcosm of what's happening in communities across the country today, as it considers the cost of the American dream.

Poll: Will you see The Unforeseen?

Crew: Who's making The Unforeseen

A look at the The Unforeseen behind-the-scenes crew and production team.

Production: What we know about The Unforeseen

The Unforeseen Release Date: When was it released?

The Unforeseen was released in 2008 on Friday, February 29, 2008 (). There were 6 other movies released on the same date, including Semi-Pro, The Other Boleyn Girl and City of Men.

Questions: Asked About The Unforeseen

Looking for more information on The Unforeseen?