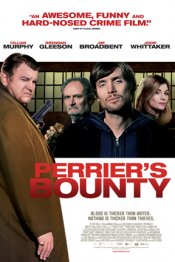 A petty crook (Cillian Murphy), his ailing father (Jim Broadbent) and a pretty neighbor go on the run from an Irish mobster's (Brendan Gleeson) goons.

Poll: Will you see Perrier's Bounty?

Production: What we know about Perrier's Bounty

Perrier's Bounty Release Date: When was it released?

Perrier's Bounty was released in 2010 on Friday, May 21, 2010 (in 1 theater . There were 10 other movies released on the same date, including Shrek Forever After, MacGruber and Racing Dreams.