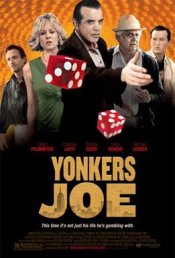 "Yonkers Joe" is an exciting, high-stakes con film and moving family drama written and directed by Robert Celestino, and starring Academy Award-nominee Chazz Palminteri, Academy Award-winner Christine Lahti, Tom Guiry ("The Black Donnellys"), Golden Globe-nominee Linus Roache, and Academy Award-nominee Michael Lerner. An ode to old time gamblers, now outdated in an age of powerful upscale casinos, "Yonkers Joe" tells the story of a dice hustler (Palminteri) whose determination to make one last grab for a big score in Vegas is complicated by the reappearance of his estranged, mentally challenged son into his life.

Poll: Will you see Yonkers Joe?

A look at the Yonkers Joe behind-the-scenes crew and production team.

Production: What we know about Yonkers Joe

Yonkers Joe Release Date: When was it released?

Yonkers Joe was released in 2009 on Friday, January 9, 2009 (Limited release). There were 5 other movies released on the same date, including Bride Wars, Not Easily Broken and The Unborn.