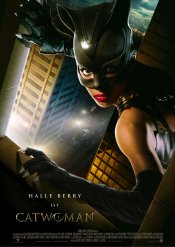 Patience Philips is a woman who can't seem to stop apologizing for her own existence. She works as a graphic designer for Hedare Beauty, a mammoth cosmetics company on the verge of releasing a revolutionary anti-aging product. When Patience inadvertently happens upon a dark secret her employer is hiding, she finds herself in the middle of a corporate conspiracy. What happens next changes Patience forever. In a mystical twist of fate, she is transformed into a woman with the strength, speed, agility and ultra-keen senses of a cat. With her newfound prowess and feline intuition, Patience becomes Catwoman, a sleek and stealthy creature balancing on the thin line between good and bad. Like any wildcat, she's dangerous, elusive and untamed. Her adventures are complicated by a burgeoning relationship with Tom Lone, a cop who has fallen for Patience but cannot shake his fascination with the mysterious Catwoman, who appears to be responsible for a string of crime sprees plaguing the city.

Poll: Will you see Catwoman?

Beauty, What About Love

Dead For A Dollar, Coco

A look at the Catwoman behind-the-scenes crew and production team. The film's writer John Rogers last wrote The Forgotten and Queen & Country.

Production: What we know about Catwoman?

Catwoman Release Date: When was the film released?

Catwoman was released in 2004 on Friday, July 30, 2004 (). There were 5 other movies released on the same date, including The Manchurian Candidate, The Village and Harold and Kumar Go to White Castle.

Looking for more information on Catwoman?